We, without doubt, lay ourselves in “places,” which, if we heed the specialty of things therein or the history therewith, appear to us as having a variety of meanings. In this serial article, we aim to contemplate various “places” found in Todai’s campuses with the cultural geographer Dr. James Thurgill, who interprets “places” by employing a knowledge of the humanities that spans philosophy, history, anthropology, and so on. Our second meeting is at Sanshiro Pond in Hongo Campus.

As can be seen in water pollution or global warming, we humans commit acts of “violence” against nature through environmental destruction. Dr. Thurgill points out that Sanshiro Pond offers us an opportunity to reflect upon such an exploitative relationship between humankind and nature by highlighting the tension that exists between humans and the natural world. We can find demonstrations of nature’s tenacity and resistance to human control all around us, even on a small scale. The rocks positioned around the pond, for instance, are uneven and slippery, making its visitors’ foothold unstable and revealing a side of nature that cannot be controlled by humans.

In addition, the perceived ‘closeness’ between human beings and nature that is felt at Sanshiro is worth mentioning. “With the picturesque nature of Sanshiro Pond before us, we begin to perceive nature not as something we utilize, but instead come to respect the agency of nature itself and feel affection toward it.”

“Is this, however, ‘real’ nature?” questions Dr. Thurgill. “The geographer Don Mitchell proposed a critical-geographical view of landscape, which at a first glance seems to be natural yet, in fact, is nothing but a ‘representation’ made by human hands.” Similarly, the nature of Sanshiro Pond gives us the impression that it has existed from ancient times, that it is somehow organic. Nevertheless, typical “natural” elements, such as plants, trees, rocks, a waterfall, the fish and terrapins living in the pond, and the cries of birds, are in fact artificially curated and managed as if the scene were in a museum. 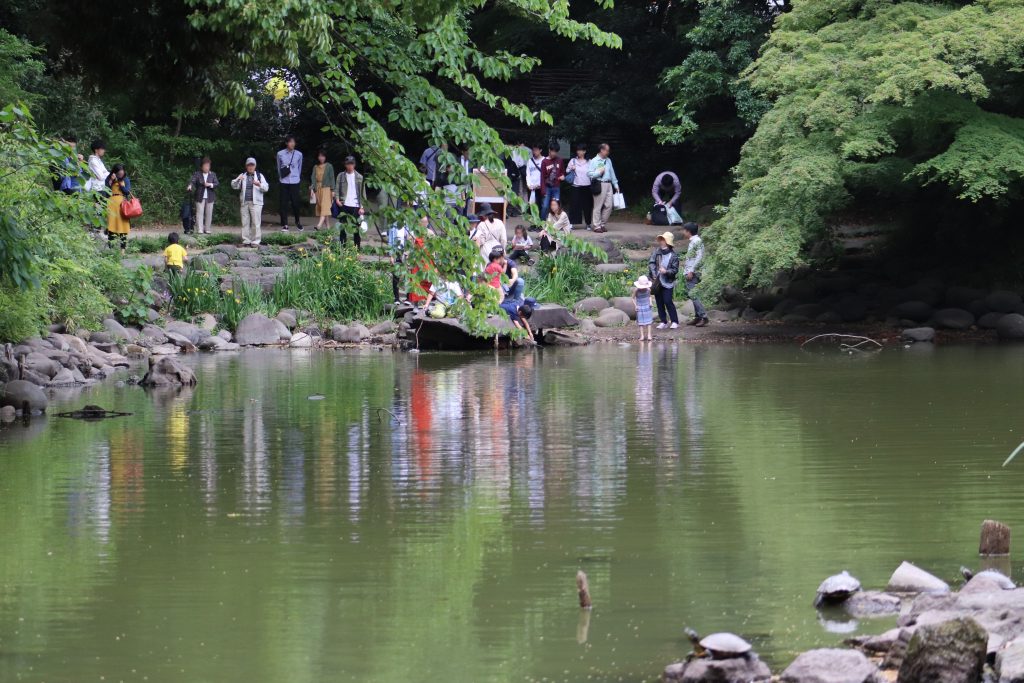 More surprising is that such a representation urges us to construct a non-violent relationship with nature, yet the place itself has actually been composed through the very violence we seek to avoid. In other words, to maintain the beautiful environment of Sanshiro Pond, to execute periodic care such as replacing the water in the pond or removing the weeds in and around it, all mean to some degree that we commit violence against nature. “All forms of ‘maintenance’ apply a certain level of ‘violence’,” states Dr. Thurgill. Yet, the water in the pond gets murky and the weeds still flourish; this is because nature is reclaiming what was taken away by human beings.

This relationship between the man-made and the natural at Sanshiro Pond is reflected in the following argument of the philosopher Martin Heidegger. In his The Origin of the Work of Art, Heidegger posits that a work of art is born from a tension between “World (Welt)” and “Earth (Erde)”. The “World” unfolded by an artwork attempts to cut away from the “Earth” – namely the physical components of the work itself, its raw materials and so on, which together operate to provide the work with context and give meaning to the “World”– yet the “Earth”, in turn, attempts to veil the “World” and hide its meaning.

How, then, can we apply this argument to Sanshiro Pond? Sanshiro Pond, or the “work”, is born from a tension between the artificially represented ‘nature’, or the “World”, and its physical components, namely the ‘real’ nature, or the “Earth” (water, land, trees, etc.). But nature is, of course, only a representation here, a reference to an idealized natural environment, and has been composed and maintained through a physical cutting away of the Earth, through an enacting of violence against nature. Nature, on the contrary, attempts to reclaim that which was stolen by human hands, through “veiling” or hiding itself within the curated representation. As such, behind the precious beauty of Sanshiro Pond is a relentless struggle between the man-made and the natural worlds.

Does it follow, then, that the affection we feel toward nature at Sanshiro Pond is meaningless? Is the reflection upon violence, which is itself realized through violence, completely futile? Dr. Thurgill denies such a view: “We ought to be conscious of the contradictions the status quo contains, yet simultaneously we ought to accept its beneficial points. This is what it means to ‘think critically’.” We are not to praise the ‘natural’ beauty of Sanshiro Pond flippantly, nor are we to feel hopeless about the violence that realizes its beauty. Rather, we need to recognize the violent background on the one hand, but embrace the affection toward nature that Sanshiro Pond offers us on the other; such an attitude can lead us to a better understanding of environmental protection.